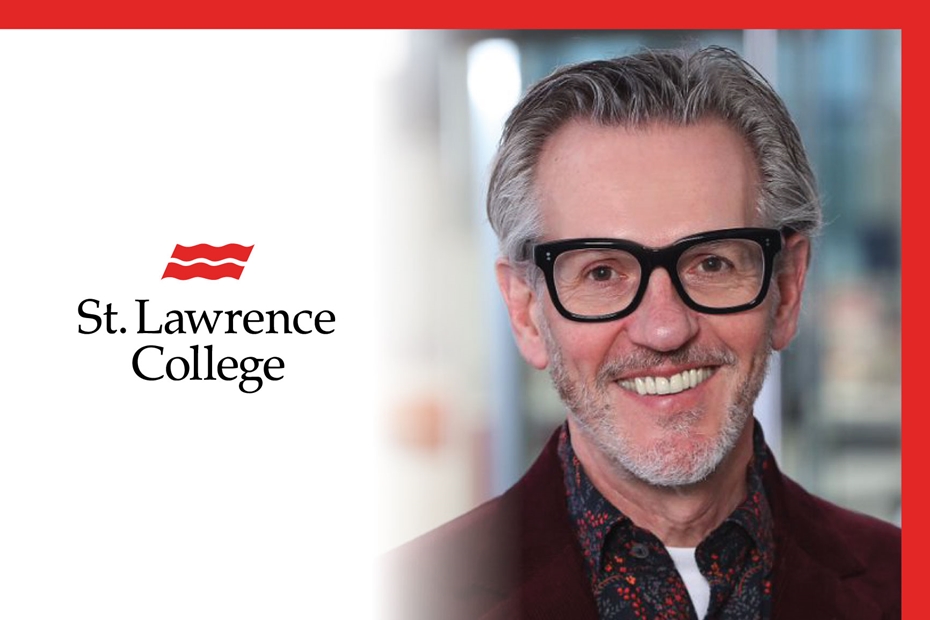 Ginette Ferguson, Chair of St. Lawrence College’s (SLC) Board of Governors announced today the re-appointment of President and CEO Glenn Vollebregt to a third term for an additional five years, until December 2027. Glenn became SLC’s president and CEO on January 1, 2013 and is in the fourth year of his second term.

In his first two terms, Glenn has had a strong student focus and commitment to student success, academic excellence, and leadership in the communities SLC serves. He has led and championed two strategic plans, Hello Future (2013-2019) and SLC in Five (2019-2024) which included extensive engagement of 1,400 faculty, staff, students, and community members.

"Serving SLC has been an incredible honour, and I am beyond thrilled to continue in this challenging and rewarding role," Vollebregt said. "I am fortunate to be surrounded by teams of dedicated professionals, for whom I am grateful for every day, as we share a collective vision, devoted to putting our students first in all that we do. Our students have always been and always will be our number one focus, and every day I am so proud of their achievements and look forward to continuing to serve them."

Under Glenn’s leadership, SLC has undergone numerous evolutions, including the largest expansion in the College’s history with the completion of the $42.2 million Student Life and Innovation Centre at the Kingston campus, the largest and most successful fundraising campaign in the College’s history with $12 million raised in three years, reaching an enrolment high of more than 10,000 students and increased international enrolment from 85 students to over 2,000.

"Glenn has shown exemplary leadership during his tenure and through the ongoing global pandemic," Ferguson said. "SLC is now in its strongest financial position in its 53-year history, as Glenn led the College from a deficit position to where SLC is currently positioned. The Board of Governors and I are excited about what the next five years will bring for SLC’s students, people, and communities, and we are confident that Glenn will continue to lead the college into the future with a continued focus on SLC’s core values."

Glenn also was at the forefront of successfully advocating for colleges in Ontario to be able to deliver stand-alone Bachelor of Science in Nursing degrees. Approval was granted recently, and the first intake of the tri-campus program will begin in September 2021. Under Glenn’s leadership, the College also launched the Centre for Behavioral Studies, an applied research centre focused on innovation in the field of behavior analysis, oversaw the development and implementation of the Centre for Teaching and Learning, and the implementation of new programs that met student and industry demand while achieving consistently top tier provincial key performance rankings.

In addition to a broad and diverse range of senior leadership experience in the private sector, municipal government and higher education, Glenn holds a Master of Science in Public Policy and Management from the University of London (UK), a Certified Public Accountant (CPA, CMA) Designation, and a Business Diploma from Georgian College. In addition, Glenn recently earned the ICD.D designation from the Institute of Corporate Directors and Rotman School of Management, University of Toronto.

Most recently, the Georgian College Board of Governors announced that Glenn is the recipient of the 2021 distinguished alumni award for his significant contributions in the field of higher education leadership. Glenn has also been nominated for a 2021 provincial Premier’s Award for his contributions to post-secondary education.

St. Lawrence College is situated on the traditional lands of the Anishinaabe and Haudenosaunee peoples; we are grateful to live and learn on these lands. With campuses in Kingston, Brockville, and Cornwall, SLC delivers education and training that meets the needs of community, industry, and employers. The College prepares students to succeed in the global economy through relevant, practical programs and experiential learning opportunities. SLC offers more than 100 full-time programs including diplomas, degrees, graduate certificates, apprenticeships, micro-credentials and life-long learning opportunities. Everyone belongs in the SLC community, comprised of 12,000 full-time students and more than 100,000 alumni in 75 countries around the world.