National Day of Remembrance and Action on Violence Against Women 2022 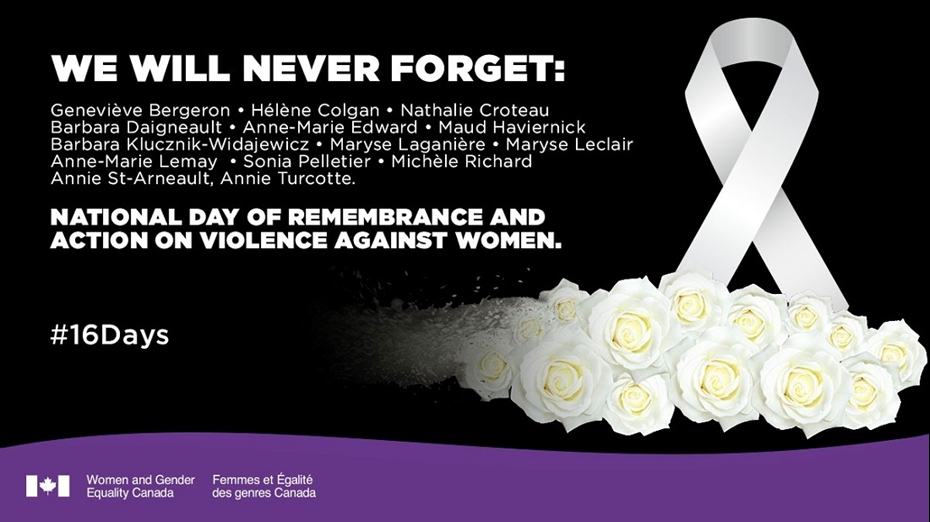 Every December 6th, we observe the National Day of Remembrance and Action on Violence Against Women. The day was established by the Parliament of Canada to mark the anniversary of the 1989 murders of 14 women at l'École Polytechnique de Montréal, who were killed because of their sex.

On December 6, we remember:

*Please take care reading the history below. The content is descriptive and may be triggering.

On 6 December 1989, a man entered a mechanical engineering classroom at Montreal’s École Polytechnique armed with a semi-automatic weapon. After separating the women from the men, he opened fire on the women while screaming, “You are all feminists.” Fourteen young women were murdered, and 13 other people were wounded. The shooter then turned the gun on himself. In his suicide note, he blamed feminists for ruining his life. The note contained a list of 19 “radical feminists” who he said would have been killed had he not run out of time. It included the names of well-known women in Quebec, including journalists, television personalities and union leaders. (The Canadian Encyclopedia)

The White Ribbon Campaign is a movement of men and boys working to end violence against women and girls, promote gender equity, healthy relationships and a new vision of masculinity.

We encourage everyone to wear a white ribbon to show support and openness to conversations and learning about gender-based violence.

Where to find a White Ribbon

White Ribbons will be available starting Monday, December 5th in Student Services on all three campuses.

For more information and support: